Sant Andreu is a former agricultural and then industrial district. In the past years almost all of the previously industrial part of the area was erased and the area received the appearance it has now. 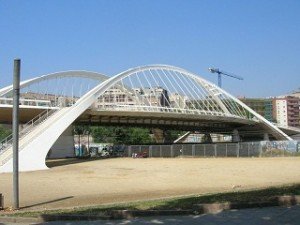 With many improvements made to the abandoned industrial areas, it is a colorful mix of landscapes – one of the most modern of Barcelona´s installations are in this area, with the charm of the old historic center of Sant Andreu de Palomar and of course the many blocks of residential buildings, mixed with a new modernism that is slowly making itself known.

The neighborhood is divided into 7 smaller “barrios”:

The very popular La Maquinista shopping complex is also located in Sant Andreu, offering a wide variety of clothing stores, supermarkets, cinemas and restaurants.  Even if you like in other parts of Barcelona, it is quite easily accessible by Metro.

The two neighborhoods of Sant Andreu and Sant Marti are separated by a railway line, which is possible to cross by means of the Bac de Roda Bridge (locally known as Calatrave Bridge).  Built between 1985 and and 1987 by Santiago Calatrava, it become on the the landmarks of Barcelona before the Olympic Games.

There is a charming local market in the centre of the Plaza de Mercadal in Sant Andreu.  In the olden days hawkers and farmers come together on this plaza in order to see their goods.  The market was designed in order for them to have a permanent premises, and to ensure adequate lighting and ventilation conditions to sell fresh produce and food.