In the past, Sant Marti was known as the industrial area of Barcelona and become officially a part of Barcelona in 1897.

Sant Marti neighborhood is divided into 10 smaller neighborhoods, so you can imagine that you can find a big diversity of areas, people, rent prices and in general different feeling in the different areas.

The 10 neighborhoods in Sant Marti are: 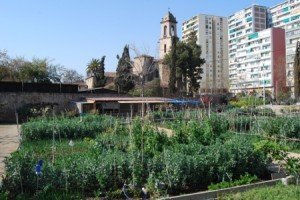 Today the neighborhood has a lot to offer its residents – amazing beaches, Rambla de Poblenou, 2 big shopping centers – Diagonal Mar and Glories, the famous Torre Agbar, which became one of the symbols of Barcelona.  Many of the tallest building in the city are located in this area, giving it a little bit of an non-typical “view” for Barcelona.

Sant Marti is known to be the new technological districts of Barcelona – “@22”. @22 is the name of the municipality project approved in year 2000 aimed at transforming the old industrial areas into new modern, innovative district, attracting hi-tech companies and knowledge-based activities.

In terms of night life the area is pretty calm, though one of the most famous Barcelona clubs are situated in the area – Razzmatazz.  In general the neighborhood is pretty quiet and residential, with the exception of some specific areas. The prices are around average for the city (except for the areas close to the beach and Diagonal Mar sub-neighborhood, where you can find some pretty expensive flats).

In terms of public transportation the area is connected very well with the other parts of the city, mainly with the yellow line. The neighborhood also has as an alternative transport, the tram.