Sarria-Sant Gervasi is one of the largest, yet least densely populated neighborhoods in Barcelona and located in the north-west of the city, this is the most upper-class neighborhood in Barcelona, with some very impressive mansions and apartment blocks. 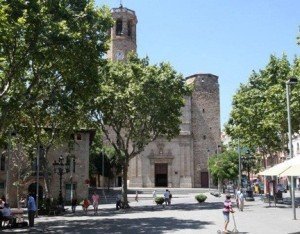 This is probably why it was independent until 1921 when it was annexed to Barcelona to the disappointment of the residents.  Since there is hardly any public transportation available here, you would definitely need your own transportation. This also makes it feel more residential, and definitely more tranquil – something which is impossible to find in the rest of the city. However, to get to Sarriá from Plaza Catalunya, simply take line 6 on the Ferrocariles (located in front of the FNAC building) and within about 12 minutes you´ll be in Sarriá.  There are quite a few stops in Sarriá itself, since the area is so big.

Houses here are very expensive, although much more modern and in better condition than those found in the historic side of the city. Another plus, is that it´s very close to the Ronda, which is the highway that circles Barcelona.  Being situated on top of the hill, means that breath-taking views are abundant.  It is also home to Tibidabo mountain, where one can take a track-car up to the top of the mountain.  There are many very nice cafes and bakeries in Sarriá, and the most famous patatas bravas bar in the city : Bar Tomás.

Sarriá is also known for the market at Passeig Reina Elisende de Montcada, which is a smaller version of the famous Boqueria on Las Ramblas.  Fresh produce such as fish, meat, fruit and vegetables is readily made available by the local traders.