One of the things that you absolutely have to do when moving to Barcelona (or even if you are only visiting as a tourist) is to watch Barcelona Football Club (most famously known as Barça) play a match at Camp Nou football stadium! It was originally named Estadi del FC Barcelona but in 2000 fans were asked which name they preferred and the majority voted for Camp Nou (“New field” in English) 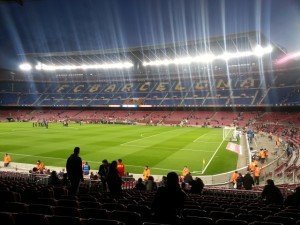 Even if you have no interest in football at all, the atmosphere and traditions of this club are very strongly Catalan and you get a real sense of the Catalan pride when you see not only hundreds of FC Barça flags and shirts around you, but an equal amount of Catalan flags being proudly waved around the stadium, and the majority of attendees being families that enjoy this activity together. The Catalan people feel so passionate about the club that their official slogan has become “Mes que un club) (More than just a club). 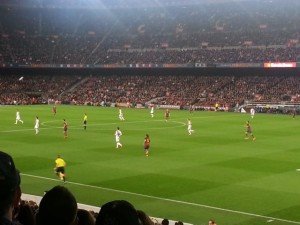 There are of course tours available to Camp Nou during the day when no matches are being played. We have never taken these tours ourselves but can imagine that they must be quite informative, yet nowhere near as impressive as watching a live match. It is however the second most visited museum in Catalonia with over 1.2 million visitors per year! The stadium currently has a capacity for 99,000 spectators (the largest in Europe) and currently there are talks of increasing this amount to 105,000, in addition to building a roof for the stadium somewhere near 2017 as well as the addition of an indoor basketball stadium.

The stadium has also served as venue for concerts such as Amnesty International, the 3 Tenors, and also U2, where Bono ended the concert by wearing an FC Barça jersey!

Now that you know a little bit more about the history of Camp Nou, try to find some tickets so watch a match there – you won´t regret it!

justland2020-08-12T20:22:35+02:00
Page load link
Manage Cookie Consent
To provide the best experiences, we use technologies like cookies to store and/or access device information. Consenting to these technologies will allow us to process data such as browsing behavior or unique IDs on this site. Not consenting or withdrawing consent, may adversely affect certain features and functions.
Manage options Manage services Manage vendors Read more about these purposes
View preferences
{title} {title} {title}
Go to Top