You may or may not know this, but at one stage, Spain was ruled by the Arabs for more than 700 years.  They definitely left their mark on the culture and architecture of Spain, as can be seen mostly in the southern parts of the country in cities like Granada and Cordoba.

Another great legacy that the Arabs left behind, was their influence on cuisine!  For example, one of the most common tapas in Spain is called Pinchos Morunos (Moorish bites), which are essentially spicy pieces of meat on a skewer – very similar to Shish Kebab, which of course is a very popular Middle Eastern dish. 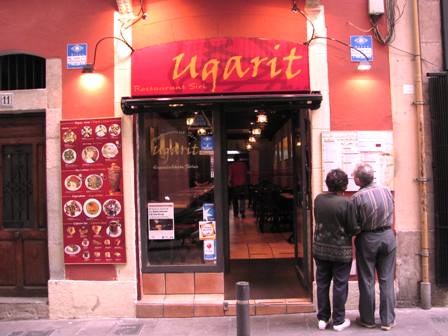 SYRIAN:  Ugarit is probably the most popular option for Syrian food in Barcelona, although some might argue that their menu is semi-Lebanese and semi-Syrian.  They have 7 locations across the city, one of which is in Villa Olimpica in the same complex where you will find the Yelmo Icaria cinema that shows movies in original version. Ugarit offers a wide variety of dishes for both meat lovers and vegetarians.  Their hummus is always freshly prepared, as is the falafel and salad. If you enjoy chicken, try the Xix Tawuk, served with a red pepper or hummus paste. 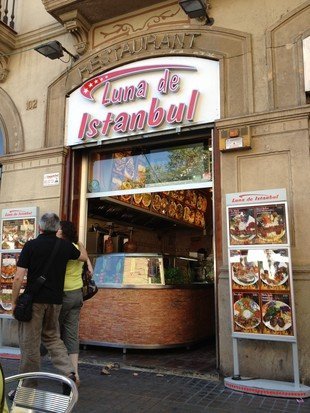 TURKISH:  Luna de Estanbul is arguably the best place to enjoy a Dürum, filled with either chicken, beef or falafel.  They have 3 locations : one in Gracia, another on Plaza Universidad, and another near the bottom of Las Ramblas.  All types of typical Turkish dishes are on the menu, ranging from Shish Kebab, Lahmacun (Turkish pizza made with minced meat and vegetables), kebabs and dürums, salads with Turkish ingredients, and one of our favorites : Yalanci Dolma – vine leaves rolled up and stuffed with onion, dill, mint, parsley and spices.

Similar to the other Middle Eastern restaurants, they also offer the ever popular Baklava, a sweet pastry made of layers of filo pastry with chopped nuts and covered with either a sweet syrup or honey. 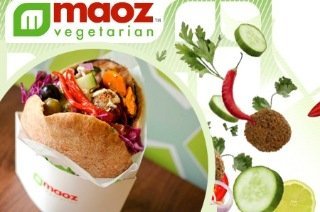 ISRAELIAN:  Maoz Vegetarian is a fast food chain that was founded by an Israelian couple who lived in Amsterdam where the first store was opened in 1991.  After that the franchises started to open in North America, Europe and Australia with great success.

The offer a freshly baked pita stuffed with warm falafel and hummus, which you are able to fill with all sorts of vegetables from a buffet, including olive paste, mushrooms, peppers, tomato and garlic, garbanzo beans and even cauliflower.  This is served with a side of Belgian style french fries and a drink. They used to have 2 locations in Barcelona, but one unfortunately closed down on Las Ramblas.  You can find the remaining one on Carrer Ferran.

I wouldn't hesitate in recommending this company and their services. Andries was a superb contact - professional, helpful and patient. The whole experience was faultless and 10/10. Thank you

Andries and Nikoleta went above and beyond what we expected. We had a tricky case being an EU+non-EU couple and thought we would have to use an immigration attorney or similar to get help with the application for my wife’s visa (because the system here is very difficult to navigate for anyone, even for native Spanish speakers).

After using their services for my NIE application we already had a great impression of them and decided to trust them to guide us through the visa application process. We are extremely happy we did. There were so many appointments, small obstacles and “traps” along the way that would have required hours of work or just made it much harder for us to do everything right.

I’m not sure how many hours, days or months they have saved us in terms of work or being able to live together as a couple, but hiring them made all the difference for us and I can’t recommend or thank them enough.

Nikoleta and Andreas they are very nice guys and really helpful. I was sure I will take their help and advices and I was really happy with the results. Everything was clear and correct. Went without any complications! They helped a lot and gave me all the useful information. Everything went well with them! I would highly recommend them!