Every new-comer to Spain gets some cultural shock – it is inevitable. I guess depending from where you come from it is a different thing that  culture “shocks” you more. For me it was the kisses for hello. I am coming from a country where we shake hands. You kiss only close friends who you haven´t seen for a long time. So the first couple of months I had the awkward situation when I was giving my hand and the person was leaning towards me. The result was some weird “crash”. So:

Greeting people, including strangers with kisses. If you are one of these people who like their personal space – you will have to change it.  I am speaking about women – to avoid confusions. It is accepted to greet with kiss between women or women and men. In case of men usually is used a hand shake or a loose hug

Siesta: It is true that every country has different opening hours of the shops and the bars and restaurants, but the siesta is very typical Spanish tradition, especially in Southern Spain and in the smaller (not so touristic) towns. Nowadays you can’t see it so much, especially if you live in Barcelona, as all the big chains are working without break and because of the tourist many of the shops stayed open from 10 to 10. Still if you work in a Spanish/Catalan owned company it is very possible that you also have a small siesta – a lunch break that lasts two hours or in some cases even three.

When is the breakfast/dinner/lunch time in Spain:  Very difficult question. Really. Breakfast could be separated in two parts – one before you go to work and another around 11. The lunch is usually between 1 and 4 and includes 1st, 2nd and 3rd.  I think the most difficult is the dinner time. In some countries people have dinner at 5 (yes, too early but healthy), most around 7-8, some maybe at 9. In Spain the dinner usually is after 9, in some cases around 10:30-11.

Tip: When you go to a restaurant, you can try to be there at 8- 8:30 (when the restaurants usually open) and you will get a table, and moreover your food will be cooked very fast as you will be probably the only ones there so early!

One of the things that measure a country’s culture is its festivals! Let’s take a look at some of them.

Fitting in with the typical aspects of Spanish culture, Spain has a tremendous amount of festivals. Being a Catholic country, many of them are religious and dedicated to certain Saints.

One of the most prominent is “Semana Santa” (Holy week). This is the week leading up to Easter Sunday.  Sevilla and Malaga are generally the most famous cities for Semana Santa, but all across the country members of local parishes carry around decorated floats in the city cathedral.


Roughly two weeks after Semana Santa, if you find yourself in Sevilla, you are in for a cultural treat! The Feria de Sevilla is basically “a holiday from a holiday”, since people need an excuse to get over the previous piety of Easter.  The festival is the epitome of everything Andalusian : flamenco, paella, sherry, horses and bullfighting.  The party usually runs from midnight on a Monday and finishes on the following Monday morning, while the party virtually last 24 hours, with activities for young and old. 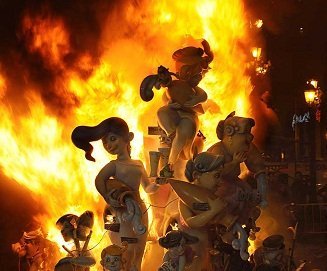 If you consider yourself a pyromaniac, make sure you get down to Valencia during the 5 days leading up to StJoseph´s Day. Las Fallas is a festival where residents of each neighbourhood get together and build giant puppets which are later set on fire. Fortunately, not all the puppets are burned, but rather taken to the Fallas Museum in Valencia.


If you happen to be in the town of Buñol (near Valencia) around the fourth Wednesday in August, prepared to get bombarded with tomatoes!  The annual Tomatino is referred to as the world’s biggest food fight, where people throw tomatoes at one another in the streets. The origin of this festival is unknown, and most probably of no interest anyway to the ones participating!

Since Spain has so many different festivals, we decided we would dedícate that last part of this post explaining more about these events that enrich the Spanish culture even more. 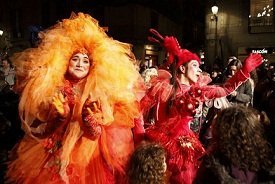 CARNAVAL (or Carnival) takes place every year around February, during the few days before the start of Lent.  In most cities around Spain you will be able to experience Carnaval, and in certain places they are nearly as extravagant as the Brazilian Carnaval.  People dress up and wear masks, which supposedly signifies “turning over a new leaf”

Probably one of the biggest festivals across Spain is Noche de San Juan.  Celebrated on the eve of 23 June, the largest one takes place in Alicante. In the Catalan-speaking parts of Spain, bonfires and fireworks are very prominent, with teens and children traditionally jumping over the fires. 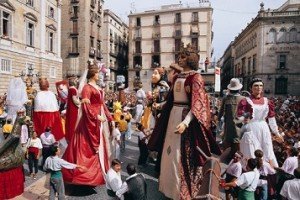 If you live in Barcelona for a while, you will very quickly learn that the patron saint of the city is Santa Mercè.  It takes place on 24 September but festivities usually begin a few days before, and involves not just the festival, but also a parade. Large paper maché giants (or gegants) that are walked through the streets are the most important feature of La Mercè.

If however you find yourself living in Madrid, you will surely know about the largest festival in Madrid : Fiesta de San Isidrio, taking place from 11-15 May 9, 2013.  Music, dancing, flamenco, zarzuelas and sampling delicacies are all part of the fun.  The festival kicks with a procession of giants, followed by an opening speech in Plaza Mayor. 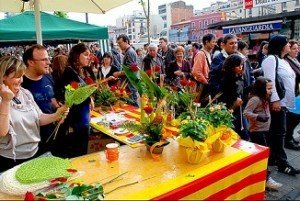 The day of Saint George (Diada de St Jordi) is the most romantic day in Barcelona, even more than Valentines day!  On 23 April, the people of Catalonia celebrate the day of their patron saint by exchanging roses and books. According to the legend, the men get books and the women get roses, resulting in book stalls and rose stalls filling the streets of Barcelona, truly creating a very romantic atmosphere combined with the Spring weather.

justland2020-08-06T15:00:23+02:00
When you browse on this site, cookies and other technologies collect data to enhance your experience. Visit our Privacy Policy (updated 25/05/18) to learn more, and make choices about the data used by us and our partners on the site. By clicking "Accept" or by continuing to use the site, you agree to this use of cookies and data Accept
Go to Top